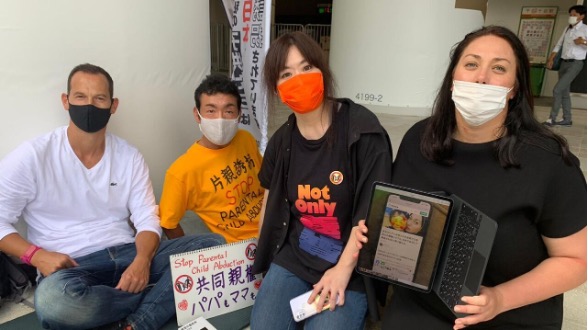 In Japan, a Khabarovsk resident Karina Kakhiani fights for the opportunity to see her son regularly. The day before, she spent a day, demonstrating at the stadium, where the opening of the Summer Olympic Games in Tokyo will take place in a week.

Several years ago, Karina married a Japanese man, but she had no life with him. Now the spouses see each other more often in courts, where they are fighting for their eight-year-old son. The boy is with his father and hardly sees his mother. DVHAB.ru has already written about this story earlier. Over the past year, the situation has practically not changed, although there is still some positive news.

– After the article was published, I translated it into Japanese, posted it on Facebook, even sent it to Putin. Many girls in Japan, theme groups reposted it. I do not know if this influenced me, but after the court ruled that I can see the child. As before, once a month, but already for two hours. In addition, my husband agreed that three times a week I communicate with the child via video link – for another half hour, – said Karina Kakhiani.

Throughout this time, the courts between the two spouses do not stop. Karina notes that in the course of these processes the evidence presented by her is ignored, and for some reason, they refused to let the Russian consul into the hall for one of the sessions. The native of Khabarovsk is still trying to achieve only one thing – joint custody of the boy.

– Yes, I would like my son to live with me. I don’t like the lifestyle of my husband and his environment: colleagues, acquaintances, alcohol, and so on. But I let the father come at any time, do homework with him, dine, and even live. I never kicked him out of the house, – said Karina Kakhiani.

The girl is now trying to tell the world about her problem with the help of a protest – a picket is being held near the stadium, where the opening of the Olympics will soon take place. Parents, also affected by legalized child kidnapping, hope to attract the attention of the authorities.

– Vincent Fishot, a man from France, organized this action. Now he sits at the stadium – he has a hungry picket. He said that he would be here until Emmanuel Macron personally talks with him and fulfills his promises, – Karina said.

The man has two children who remained with their Japanese mother. Whether they are alive and where they are – the Frenchman does not know. He has already applied to the European Court of Human Rights, but he also hopes for some reaction from the President of the Fifth Republic, who had previously promised to help. In Japan itself, the issue of double custody of a child is periodically pushed. Former Prime Minister of the country Shinzo Abe made such a proposal in parliament, but after his resignation, the issue was actually removed from the agenda.

– It’s just a pilgrimage for such parents, everyone tells their stories – and they all have one. Japanese divorce lawyers actually offer clients to steal children. Then you can keep the child for six months and automatically receive custody – that’s all, – Karina Kakhiani summed up.

Good afternoon, Far East, my name is Kahiani Karina and today I want to tell you about the current situation in Japan. The situation is developing around the Olympic facilities at Sendagaya station, this is the center of Tokyo, the most protected area of Tokyo now, because it is here that the stadium is located where the opening of the Olympic Games will be held and the presidents of all countries will be present. In the background you see a rally organized by the parents whose children were stolen by the Japanese authorities. Why stolen? Because in Japan kidnapping is really legalized and is actually legal at the level of state power, and in particular the judicial system. The Japanese system stole the children from all these people. How? In Japan, there is no law that dual custody is present in the country. In Japan, sole custody. In fact, the parent whose child was stolen loses it forever! He may never see again, for no reason. You don’t need to be a bad parent to lose your child. According to unspoken laws, this is an unacceptable law, the Japanese court makes a decision that if a child has been living on the side of the parent who stole him for more than six months, then that parent will automatically be the guardian. After that, the first parent will no longer be able to achieve anything in the courts. If the guardian, even the guardian who stole the child, is actually a legalized kidnapping, do not agree to personal meetings of the second parent with the child and despite the fact that the child wants to see the mother or father whom he was deprived of, the Japanese court will not make any additional decision. It’s an awful system! That man from France, the father. He does not know where his children are, he asks only one to be allowed to at least see his children on the territory of the French embassy. He was personally promised by President Macron.

Good day! My name is Vincent. I am a Frenchman but live in Japan. My two children were kidnapped in this country three years ago. Since that time, I have not seen them again, I do not even know if they are alive or not.  At my request, the Government of France, represented by President Macron, asked the Government of Japan to provide information about the lives of my children over the past three years. But the Japanese authorities did not respond to the request. But all my actions did not bring results. I have no other choice, so I went on a hunger strike on July 10, 2021. I want to see my children!