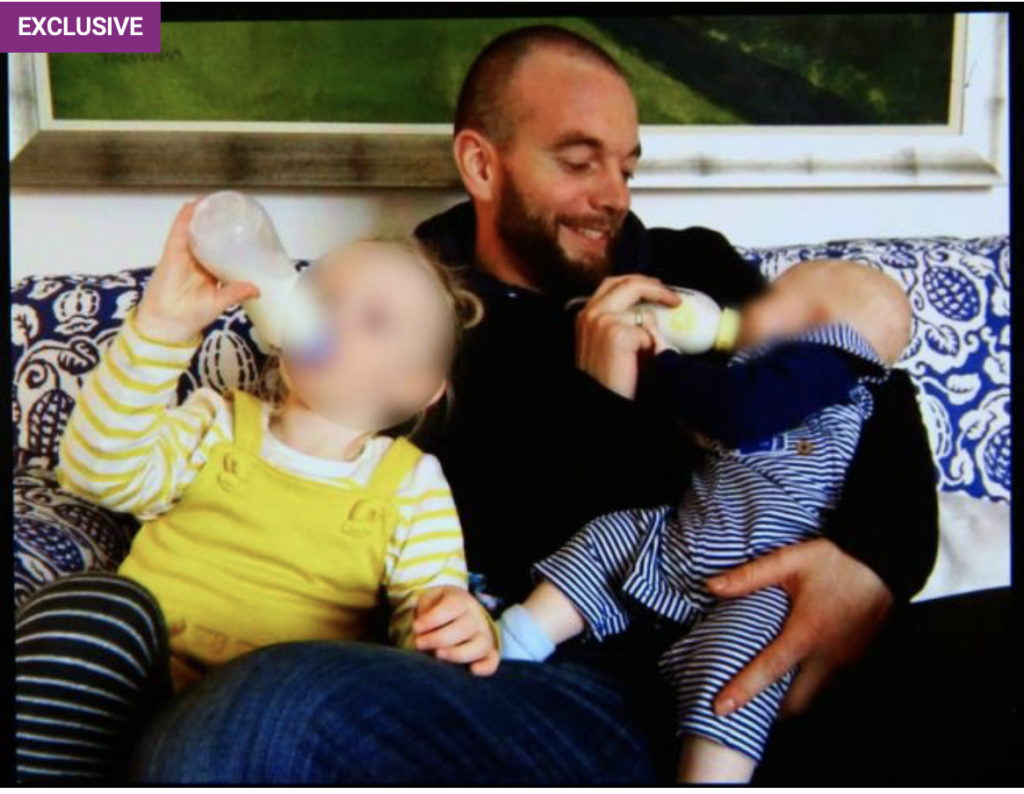 A father has told how he has been “reduced to rubble” after a legal loophole in Scots law allowed his wife to take his children abroad and never return.

Nathan Gilmour does not know where his six-year-old daughter and three-year-old son are after his wife Angelica Gilmour Gray left the country with them in July 2019.

Mr Gilmour, a teacher from Ayrshire, has spent the last two years pleading with the Scottish authorities to take action, but as Police Scotland do not consider the children to be at risk, there is no recourse to bring them home.

The 37-year-old is now considering legal action against the force, as well as a judicial review challenging the law in Scotland.

In England in Wales, there is legislation in place preventing a parent from taking children abroad without another parent or carer’s consent and police will assist in finding and returning children.

In Scotland, it is not a criminal offence unless there are certain courtorders in place.

The Scottish Government said it will consider making amendments to the legislation “in due course” as part of its Family Justice Modernisation Strategy.

However, Mr Gilmour, who has been unable to work due to the toll on his mental health, wants to see action taken urgently.

He said: “I’ve not seen my children in years. My son won’t know me and my daughter probably won’t remember me.

“I feel like I’m just being passed from pillar to post. No one seems to want to take action. These are two Scottish children and no one knows where they are or what might be happening to them.

“The toll on my children is enormous. My primary fear and concern is for them. But not knowing where they are, the emotional and psychological strain on myself and my family has been extraordinary.

“It’s reduced me to rubble, it’s all consuming. Most parents will know that feeling when they don’t know their children’s whereabouts for ten minutes. For me, that feeling is even more heightened and it doesn’t go away.”

The couple separated in December 2017 and in April the following year, Mrs Gilmour Gray refused to allow Mr Gilmour access to his children, resulting in a court battle at Ayr Sheriff Court.

However, instead of taking them to their first meeting, she fled the country.

Mr Gilmour reported her and the children missing and an emergency court hearing was called, during which it was discovered that they were at an address in Wraclaw in Poland.

A police officer managed to speak to her over the phone and she was ordered to return home. But she refused to do so and authorities now believe she moved on within a week.

Sheriff Pattison has since issued a civil warrant for her arrest. However, these can only be enacted by sheriff officers.

A private investigator hired by Mr Gilmour believes his children may now be in the Turkish Republic of Northern Cyprus.

Mr Gilmour has passed various pieces of information on to Police Scotland, including court documents indicating that the children may be at risk, but they have refused to intervene.

This is primarily because under the Child Abduction Act 1984, international parental child abduction is only considered a criminal offence in Scotland if there are certain court orders in place at the time the child is removed from the UK.

According to charity Reunite International, which helps people like Mr Gilmour, this means that parents in Scotland are not able to access the same help and support from the police after an abduction as parents in other parts of the UK.

A spokesperson for the charity said: “We have seen cases, like Nathan’s, where the risk of harm from abduction is not appreciated by authorities, and assumptions are made about the safety of children that are not always accurate.”

She added that cases like this can have “serious long-term consequences” for the children involved.

In 2018, the Scottish Government consulted on the issue following a campaign to change the law. Officials decided that further work was needed before any decision was made.

Reunite claims that no further work has been carried out to date.

International lawyer Yousif Ahmed, who headed up the 2018 campaign to close the loophole, dubbed the ‘kidnapper’s charter’, said: “We were assured at that time that the Scottish Government would look at changing the law to help prevent these child abuse cases from happening.

“We do not know why that has not been taken any further forward and are left bewildered by the Scottish Government’s failure to close the loophole and help prevent international parental child abduction in Scotland.

“We know that these cases are still happening – children are still being taken and removed from Scotland by one parent, without the knowledge or consent of the other, and lives are being ruined as a result.

“The heartbreak and devastation it causes is indescribable.”

The campaigners and Mr Gilmour are calling on ministers to take action now to stop children and parents going through similar situations.

Mr Gilmour said: “The comment I always get back from ministers is that more work is required, but no work seems to be being carried out.

“They seem to believe that this is a reasonable excuse to provide a father whose two children are missing, with police saying that they can’t pursue it because of this legislation.

“Ministers seem to think that pointing to a document saying more work is required is a good enough response.”

Mr Gilmour has lodged a formal complaint with Police Scotland and the Police Investigations and Review Commissioner as he believes officers should consider his children at risk.

He is now seeking legal advice on pursuing damages against the force at court and potentially raising a judicial review to look at the legislation.

However, as he is still a joint owner of the family home, he is not entitled to legal aid – despite the fact he cannot sell it until Mrs Gilmour Gray agrees or she has been missing for seven years.

“For two years now, I’ve been asking for help and no one seems able, or willing, to help me,” he said.

“If I had been a mother in this position I feel that more effort would have been made to return my children.

“Taking action against the police is not something I do lightly, but I feel like I’m left with nowhere else to turn now.”

Pauline Barr, a legal adviser with DM Legal who has been assisting Mr Gilmour, said: “These children are at risk, cut off from any and all external sources of support.

“These children are unseen. They are without a voice. We call on Police Scotland to recognise the risks posed to these children in order that action may be taken to return them home.”

Mr Gilmour last met with the police a few weeks ago after submitting further evidence. He is waiting to hear if they will consider reassessing his children’s case.

A spokesperson for the force said: “Officers, along with partners, are currently assessing further information that was received following a meeting with Mr Gilmour in August 2021.

“We are aware that PIRC are currently reviewing how Police Scotland handled a complaint from Mr Gilmour, and it would be inappropriate to comment on that further.”

The Scottish Government said it was aware of the case and had been working to try to secure the children’s return under the 1980 Hague Convention.

However, Mr Gilmour has been told that there is nothing more that can be done by the Scottish Central Authority, the government body which facilitates the Hague Convention in Scotland, until they are notified of the children’s whereabouts.

If the children are now in Northern Cyprus, returning them will prove extremely difficult as the area is not a signatory of the convention.

A Scottish Government spokesperson added: “International child abduction is included in our Family Justice Modernisation Strategy and we will consider if any amendments are needed to the legislation in due course.”