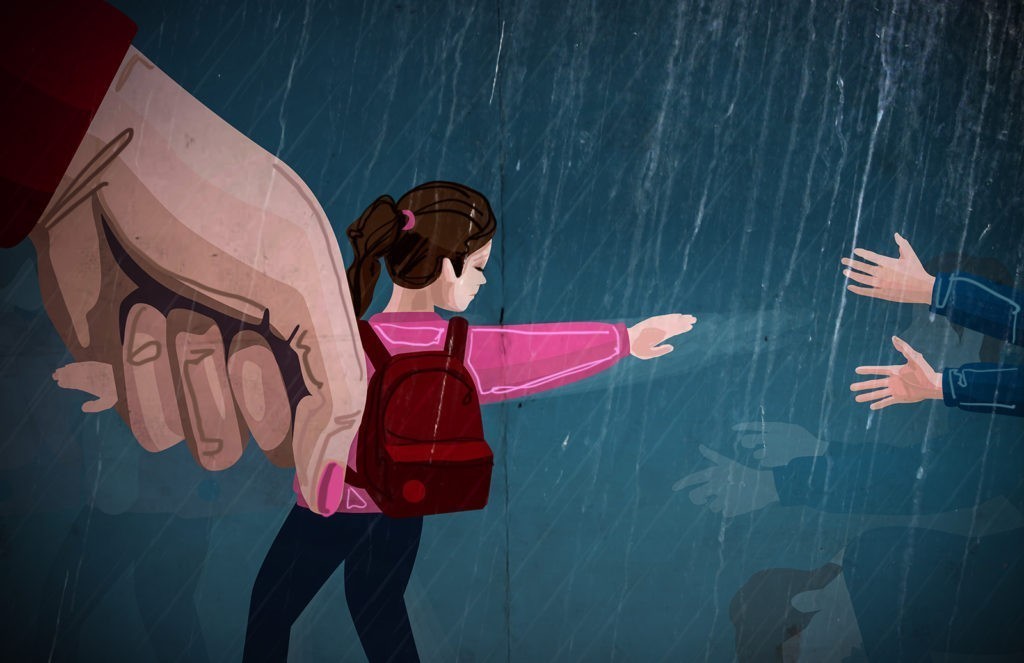 One father’s story after hearing, ‘You are never going to see your daughter again.’

The following is Part 1 of a three-part series on divorce in Japan.

Another awful night of sleep. More stress and worry of losing my daughter. She was here sleeping next to me only a few months ago. Now she’s gone. It’s a parent’s worst fear.

She’s been kidnapped — even if it was by her own mother.

This is where she belongs, in an upscale neighborhood in North Osaka, next to a park and five minutes away from her school. My daughter belongs in her home, waking up in her pink pajamas, sitting next to me and laughing as we make blueberry pancakes together before working on her homework and going for a bike ride. She’s got a new bike. It’s her first one. It was a present for her birthday. Now the bike sits in the parking structure, waiting for her to ride it. But she isn’t here. She has been kidnapped.

No sunshine. No rainbows.

I was 33 years old when we called it quits. I spent seven years married to my Japanese spouse. We got married in Canada in 2009. We had a cruise ship wedding reception in the Great Lakes before we moved to Japan. She suffered through bouts of postpartum depression after our daughter was born. She struggled with an overwhelming and overbearing mother. She floated between various jobs with long bouts of intermingled unemployment and I slowly lost faith in her abilities as a partner — and as a mother.

I was disillusioned that it would ever get better and then in year six, she started threatening divorce.

A few years into the marriage, two members of her immediate family died and that also negatively impacted her mental health. All the while, I was losing my ability to trust her to take care of the basics like adequately feed and clothe our daughter. Her depression manifested into hoarding physical things like napkins, bags, food and papers that our daughter had touched or used. At the same time, she was obsessively photographing and taking video of anything associated with our daughter. Often up to 500 photographs a day. Her reluctance to maintain an adult lifestyle took a toll. I was disillusioned that it would ever get better and then in year six, she started threatening divorce.

The first time I actually gave her threats any weight, my best friend from Canada had traveled to Japan and I fell asleep after a busy day of sightseeing, touring and catching up on stories. When I woke up, I heard my now ex-wife’s voice say, “I want a divorce.”

She was speaking to him — my childhood friend, the best man at our wedding. I didn’t immediately open my eyes. Rather, I sat there and just… listened. Listened to her conversation and took stock of our situation. She wanted out.

When I did open my eyes, when I did stand up, hen I did begin to speak, I let her know plainly that if she wanted a divorce she was free to leave and that she could go at any time.

We eventually worked through that disagreement and the cycle continued. One day, she was leaving and moving back in with her parents, then we’d talk through it and work it out. She would have another meltdown a month or two later. She would dramatically start packing her bags and each time we would talk it out and slowly I began to realize that it wasn’t a happy arrangement. Ultimately, her mental illness, overall laziness and ineptitude played a major role in my decision to take her up on her suggestion and to divorce.

In hindsight, I probably made a few mistakes in handling the situation.

In hindsight, I probably made a few mistakes in handling the situation. My reluctance to give her adequate time to talk through her troubles and our tight financial situation were, indeed, issues I could have better addressed. My work schedule, cooking and caring for my daughter and a long commute combined to take away any additional time that my now ex-wife needed to verbally work through all her emotional troubles. Our budget was stretched thin with my income covering living expenses, expensive private school education and all the other necessities, while my ex-wife was only occasionally contributing to the household budget. My lack of Japanese language abilities also put some distance between her overbearing family and I, which she claimed was problematic in the marriage.

Divorce is a cancer that grows.

It starts off small.

It starts with a suggestion.

One partner threatens it.

It becomes a weapon — a way to get attention, a fear tactic, something used to control another person’s free will and make them behave.

“I want a divorce and you are never going to see your child again. I am sure she won’t even remember you.”

This is the most devastating thing a mother can say to her husband and the father of her children. After that, there is no trust to speak of. It’s over. The threats became the reality. The cancer devours the marriage and claims another victim. When children are involved, they are victimized the most.

I have become another statistic in Japan.

In Japan, they are basically kidnapped from the father and these children, like my daughter, lose a loving dad, loving grandparents, uncles, cousins and friends.

I have become another statistic in Japan. According to the Nagoya International Center, over 15,000 international marriages end in divorce each year in Japan.

I have become a divorced foreigner living in Asia. I didn’t have my Canadian family or my lifelong friends around me as I navigated one of the most difficult years of my life. The sleeplessness, the stress and the worry beat me down as I went through an eight-month separation period before ultimately getting an agreement in place and getting divorced by mutual agreement at the local city office in a suburb of Osaka.