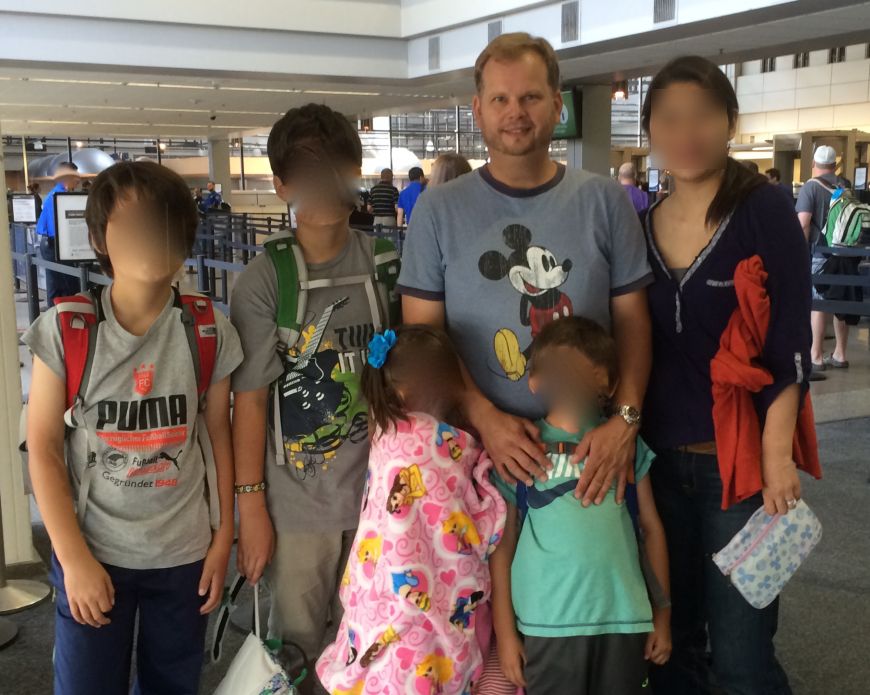 His four children were abducted to Japan from Minnesota by his Japanese wife in 2014. This was after Japan acceded to the Hague Convention on the Civil Aspects of International Child Abduction, so he might have had hope in the early days.

Using the baroque procedural regime the Diet passed for the sole purpose of implementing the Convention, he sought a return order for his children in the Osaka Family Court. The court granted a return order, but only for the younger two — twins, both 7 at the time — not the older pair, who were 12 (and also twins). In doing so, the judge demonstrated what many of us in this area already know: that family court judges — even those tasked to a Hague court — don’t have a [bad word]-ing clue about children or what is good for them. Basic family law common sense says you don’t separate siblings, particularly when they have already been deprived of one parent.

Maybe the judge was deliberately trying to foist this case on a higher court. In any case, cutting the babies in half didn’t work and both Cook and his estranged wife appealed.

To its credit, the Osaka High Court then issued a return order for all four children (golf clap). Then came the efforts to enforce this order. These can be frustrated by a “taking parent” (as they are known in Hague parlance) simply not cooperating.

This is because the rules around enforcement of such orders are literally designed to ensure they will only work if the taking parent and the children involved play along. Sometimes they do and it is succcessful, but in this case it did not. The only sanctions for not cooperating are financial, and collecting those is similarly problematic. Last month the U.S. State Department cited lack of enforceability as a factor in describing Japan as showing a “pattern of noncompliance” just four years after it signed the convention.

It also probably didn’t help that the process is also allowed to facilitate alienation of the left-behind parent by the taking parent. Cook had virtually no contact with his children during this time, which of course makes it easier to get kids to say they want to stay in Japan to authority figures when necessary.

Cook’s wife appealed the high court ruling to the Supreme Court but lost. From there, you might imagine it would be just a matter of pursuing the enforcement process persistently enough until it paid off — maybe.

One more bite of the apple

However, Japan’s Hague implementing statute includes a procedure for moving for a new hearing, even after appeals are exhausted. This is odd, since the point of the convention is to get children back expeditiously, not give the taking parents as many bites at the apple as possible.

Cook’s wife petitioned the Osaka High Court to reconsider the return order, essentially arguing that he had been rendered insolvent by the long legal struggle she had triggered and was not capable of looking after the children in the U.S. The court bought it and rescinded the return order — conveniently ignoring that (according to his impeachment petition) she also owed him close to $100,000 in fines for noncompliance with earlier enforcement orders. Cook appealed to the Supreme Court and lost, thereby establishing a nice road map for future abductors.

I had thought this meant “game over” for Cook, as it sadly does for so many other parents, Japanese and foreign alike, who lose contact with their children in Japan through the nonfeasance or even abetment of the nation’s courts, Hague Convention notwithstanding. But did I mention Cook is relentless?

In April of this year he filed a petition with the Judge Impeachment Committee of the Diet — against the five Supreme Court judges who upheld the Osaka High Court’s Mulligan.

Windmills may also be involved, but the quixotic quest for justice by people who could do other things with their time is where a lot of important law comes from. The judges will never actually be impeached, for reasons I will get to, but power to Cook for hammering at every crack as hard as he can.

Judicial impeachment is a U.S.-style separation-of-powers check-and-balance that was incorporated in Japan’s Constitution. Article 64 of said Constitution requires the Diet to set up an impeachment court for the removal of judges, and Article 78 protects judges from removal other than by impeachment or for reasons of mental or physical incapacity.

Not a lot of petitions are considered worthy of referral to the court. From 1948 through the end of 2017, the committee had received petitions complaining about 19,814 judges (the actual number of petitions is much, much larger, since the committee statistics treat multiple complaints about a particular judge as a single incident). Of these, most were filed by regular citizens, a much smaller number by lawyers and others. The majority cited “wrong decisions” as the grounds for the petition. Of course, impeaching judges for rendering a decision one party doesn’t like would see all of them out of a job. Unsurprisingly, most petitions don’t go anywhere, but still, in 70 years the commission has referred only nine judges to the court for trial and “suspended” prosecution of seven others.

The summaries of cases of suspended impeachment on the committee’s website are revealing. Examples of judicial behavior deemed egregious but still worthy of mercy include: switching judgments already rendered in order to hide a mistake (1953); failing to shush a group of defendants calling for a moment of silence to commemorate the death of Stalin (1954); appearing to have agreed with police and a mayor, over drinks, to fix a bribery case against the mayor (1954); and churlishly allowing a “private letter” from a senior judge not involved in a constitutional case recommending how the case should be decided (1965 — the senior judge never got even a suspended impeachment, of course).

So what about the nine cases referred to impeachment? First there are two from 1948, both involving judges caught dealing in the black market. Possibly because everyone needed to do that to survive the deprivation of the postwar period, both were acquitted.

The remaining seven cases all saw the offending judges losing their jobs, for the following transgressions: doling out blank signed warrants; being entertained by a party to a case; pretending to be a top prosecutor in order to call the prime minister and providing a tape of the resulting conversation to the press; accepting gifts from a lawyer; using child prostitutes; stalking a female court employee; and using a cell phone to take pictures up a woman’s skirt on a train. Two other judges were also recently busted for similar behavior, but since they were on secondment to the Ministry of Justice and technically prosecutors at the time (separation of powers!), they could not be impeached but lost their jobs through other procedures.

Unfortunately, it is easy to imagine that being the easy path for the Diet member “judges” on the impeachment court: “Hey, if the Supreme Court wants to impeach him, he must be guilty.” After all, the same logic seems to apply in criminal cases: “Prosecutors wouldn’t be prosecuting him if he wasn’t guilty” — 99.9 percent conviction rate, anyone?

The Supreme Court bureaucracy already has numerous tools for sanctioning naughty judges. These include administrative tools such as formal cautions, postings to isolated branch or family courts, or simply not recommending them for reappointment at the end of the constitutional 10-year term all but those on the Supreme Court serve. Above this there is an entire internal trial system that can be used to discipline misbehaving judges or even remove them if they are found mentally or physically unfit.

That the impeachment court might simply be functioning as a top-level disciplinary tool does not say much for separation of powers. Nor, of course, does the fact that while the impeachment commission members may be Diet members, its administrative functions are performed in part by judges on secondment from the judicial court system.

So anyway, this is why the likelihood of Cook’s petition to impeach five judges at the very top of this system has zero chance of success. But at least it was accepted. Although the Judge Impeachment Act says “any person” can file a petition, the impeachment committee website says one from a foreign national will first be reviewed and, if it has merit, submitted by the committee on its own authority.

Such pointless discrimination clothed in technicality is perhaps just another indicator of why expectations about the Hague Convention should continue to be set low.

Colin P.A. Jones is a professor at Doshisha Law School in Kyoto. The views expressed are those of the author alone.