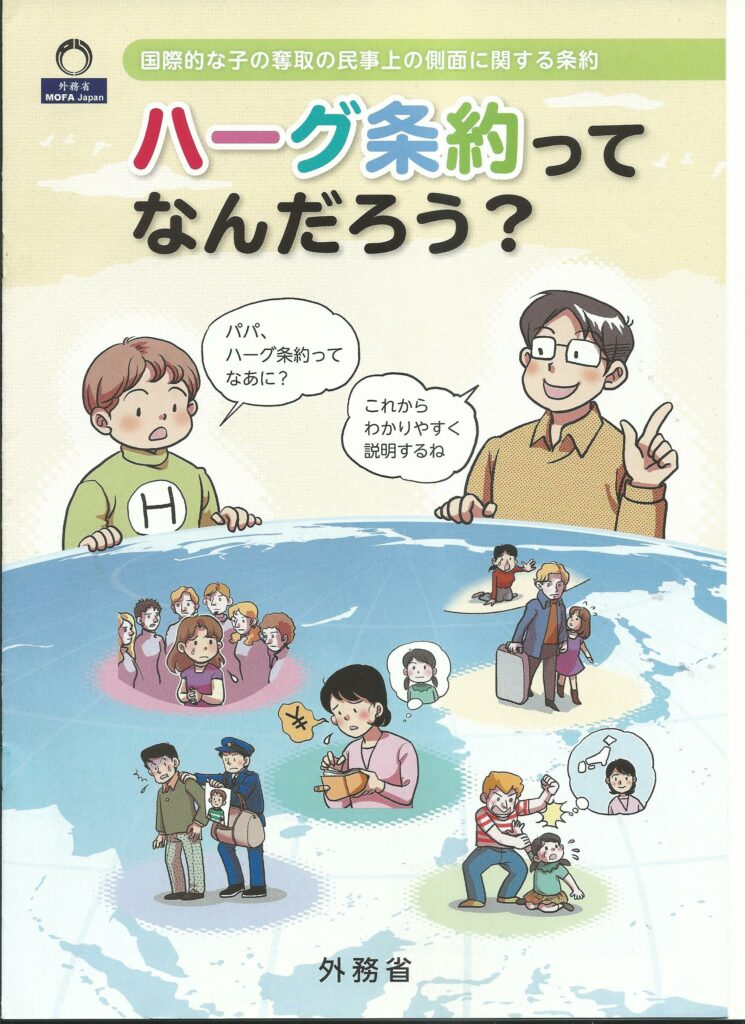 Hello Blog.  Japan, after years of pressure from overseas, is now a signatory to the Hague Convention on the Civil Aspects of International Child Abduction, where children of international marriages are to be protected against psychologically-damaging abductions and severed contact with one parent after marriage dissolution and divorce.  Debito.org has covered this issue extensively in the past.  What matters now is how Japan intends to enforce the treaty.  Debito.org has argued that we are not hopeful about Japan following the spirit of the agreement in good faith.  It has been reinterpreting sections with caveats to give the Japanese side undue advantages in negotiations, indirectly portraying the Non Japanese (NJ) party as the suspicious interloper, redefining important issues such as domestic violence (DV) to include heated arguments and “silent stares” etc., refusing to see abductions by the Japanese parent as much more than a natural repatriation, and not being self-aware that in Japan, child abduction and severed contact with one parent is quite normal (due in part to the vagaries of the Family Registration System (koseki)), but not necessarily in the best interests of the child.  Japan has been, in short, a haven for international child abductions, and how the GOJ will interpret the Hague to its people is crucial for change in public mindsets and enforcement.

To that end, Debito.org is fortunate to have received a copy from a concerned reader of a 2014 Ministry of Foreign Affairs (Gaimushou) pamphlet explaining the Hague to the Japanese public.  Scanned below in full, within its discourse are troubling assumptions and presumptions that bear scrutiny and exposure, as they remain along the lines of the concerns expressed above.  If this is Japan’s official mindset towards international child abductions, then Debito.org remains pessimistic, if not cynical, about Japan’s intentions to enforce the Hague in good faith.  Dr. ARUDOU, Debito

UPDATE, courtesy of Debito.org Reader Oliver:  The pamphlet can be found on the MOFA website, so it is genuine. PDF is here:

And there is even an English language version!

From the Japanese Consulate in Hong Kong, courtesy of XY.

This is the cover image, with a father about to explain the Hague to his curious son, and look what makes the first impressions:  The J mother sobbing as the NJ parent whisks their child from her grasp.  The child being stared at and not fitting in with her big-nosed NJ classmates (Japanese rarely have much of a nose in Japan’s international illustrations; it’s a style, but it makes it seem as if NJ are never Asian; never mind).  The J father being nabbed by the police regarding his kid.  The J mother short of money when thinking of her daughter.  And, of course, the obligatory drawing of the physically-abusive NJ parent with the child longing for her J mother.  The point is, the J mother is in most situations the one being victimized.

The first page already has a case of the cutes (even though, since this book has no furigana over the kanji, it’s a manual directed towards adults, not children), with a J father explaining to his son suddenly overwhelming him with questions (after complimenting him on his interest in the news) about how, as of April 1 2014, Japan has to follow the Hague regarding the “tsuresari” (“accompanying and disappearing”, not the more hot-button term “rachi” used for “abductions” when it’s Japanese being abducted to North Korea) of children.  After making a deal with him to eat all his dinner before hearing more, we have a prototypical J=NJ union couched as between a Japanese and a Gaijin (even though most international marriages in Japan are overwhelmingly between Japanese and Asians): the NJ male makes off with the child, the child has trouble fitting in overseas due to language and environmental difficulties, and the child is happily returned to the J mother’s arms thanks to the glad hands of the Hague Treaty thinking of the best interests of the child.  By the end of the page, the son is already shuddering to think what it might be like to live in a foreign country, what with no friends in school and all that.

Next page has more explanation about what will change under the Hague.  The first point is that Japan had no standing to have children returned if they were abducted.  The poor victimized J-mother had to find her child with no help (apparently by showing a photo to taller Gaijin strangers giving her the cold shoulder), and even had to go to court to ask for custody (in a place with different laws and culture!).  How terrible, the child notes, for the parent to suddenly have to go to a big country and look for a little child.  Of course, then the converse is depicted to be true (but without the sobbing child pining for his NJ dad as the J mom takes her back to Japan — in fact, more alarm from the child that he can’t return to Japan), with consequent difficulties in seeing their child (NB:  Nowhere mentioned is the fact that joint custody and visitation is guaranteed in some of these overseas places with the dreaded “different laws and cultures”, but not in Japan.)  And what about the case where the divorce takes place overseas and the J-mother wants to take the child back to Japan?  The courts will deny the mother the ability to leave!  (“What, you can’t go home to your country of birth??” proclaims the ever more-startled son at the end.  Even though that exit denial didn’t happen, for example, in the Christopher Savoie Case, which is why the abduction of his children occurred.)  Conclusion:  Already the issue is portrayed in a lopsided manner, with the J-mother being the more victimized party overseas.

Next page succumbs to an even more silly case of the cutes, not only with the katakana-accented NJ begging a J court for his child back, but also with an animated doll appearing as an interlocutor because Papa happens to be an anime otaku fetishist (rather unbecoming of a serious issue in a serious pamphlet issued by a national government).  Carrying on…  This section talks about how signing the treaty makes it so that either side can have their child returned, meaning this will stop courts from hindering parents from returning to their countries at will, because if problems arise, there is an apparatus where courts can return the child if necessary.   (NB:  Not mentioned is that there has not been a single recorded case in Japanese court where a Japanese child has been returned to a NJ parent’s habitual residence overseas, meaning there is no precedent that the apparatus will work on the Japanese side.)  It also will probably act as a means to preempt abductions, says the pamphlet.

Then the pamphlet turns to a case of one of Papa’s friends (a J mother married to a NJ father) who abducted their child to Japan.  It went before a Japanese court, with the child standing at the mercy of the gavel, fate uncertain.  But just to make sure there is a lingering scare, the son expresses doubt as to the justice of a child being repatriated to a physically-abusive (!!) NJ father (where did THAT presumption come from?). Once again, the NJ father is being portrayed as potentially abusive, even though, naturally, abusive J (mothers or fathers) exist in Japan.

Next page allays the fears of injustice, with a list of reasons why a child would not be forcibly returned thanks to the Hague (bonus image of the loving mother embracing a heart and saying that she will prioritize the protection of the child).  But — horrors — at the suggestion by the child that Papa’s friend shouldn’t have abducted the child and should have perhaps gone to court in America, Papa immediately kiboshes that by mentioning how American courts have a different culture, procedures, language barriers, and might even award custody of the child to a third party! (Again, no mention of the possibility of joint custody or guaranteed visitation rights enforced overseas, neither of which are permitted in Japan due to the koseki Family Registry system, aka “different culture”).  The nuance of this section becomes “it’s oh so complicated, no wonder Papa’s friend abducted their child”.  Conclusion of this page:  It would be awful if one parent couldn’t see their child (which is disingenuous coming from the GOJ because, as mentioned above in the introduction, child abductions without joint custody or visitation rights even between Japanese parents in Japan are quite normal).

Suddenly, a sad fate befalls even this family, what with Papa being revealed as married to a French woman named Marie (who speaks normal Japanese; DV and broken Japanese seem to be the lot of the Western NJ male) who has run off to France with their boy.  Fortunately, thanks to the Hague, the GOJ can intervene, contact the French government, ascertain where she and their child is, get the authorities over there to mediate, get Papa to abandon his anime fetish (good thing he’s not a physically-abusive man; it’s just a harmless fetish, so nothing to fault the J man overmuch for as any serious grounds for divorce, right?), and get them all to make up and fly into the sunset back to Japan for a happy life ever after.

Next page outlines the Hague procedures in three basic steps.  Of course, it’s all NJ men and J women (three different couples).  Visually, note the nuance of the child once again being more distressed to be leaving Japan with her father than going back to Japan with her mother.

Next page lists the countries that are signatories to the Hague and the key points of it in bullet form.

Next page gives the key points in Q&A format, first with what happened before Japan thankfully signed the Hague (abductions with impunity!), second with what to do if an abduction from Japan to a signatory country takes place, third with how long the Hague is in effect (until the child is aged 16), and fourth with a warning not to go abroad and reabduct your child back (you’ll be arrested; get a lawyer).

The penultimate page gives more Q&A, with the obligatory 5) what to do in cases of DV (paste in NJ dad child abuse image again), or even the possibility of DV in the past (ko ni aku’eikyou o ataeru you na bouryoku), with a special section on page 5 above just in case you should want to use Japan’s increasingly grey and loose definitions of DV to get your child back; 6) getting J diplomats to help you out overseas; 7) getting a better understanding of the laws and Alternative Dispute Resolution using public resources.

The pamphlet ends with the boy saying how he understands it all now, and the dad saying how nice it would be if more countries signed the Hague.  Quite.  But not the way it’s being interpreted here.